This session presents two classic documentaries filmed in the streets of New York. In the Street, by photographers Helen Levitt and Janice Loeb, portrays everyday life in Harlem in the forties, whereas On the Bowery by Lionel Rogosin, a decade later, centres on a depressed area between Chinatown and Little Italy, populated by alcoholics and bums.

Following three days in the life of two alcoholic tramps, Lionel Rogosin produced a portrait of the “real” America, outlawed by the commercial cinema, later to emerge in the films of the American cinema, of which On the Bowery was one of the first landmarks. To make this humanistic portrait of a place and a group of people in crisis, Rogosin followed the methods of his admired Flaherty: after writing a storyline based on his study of the medium, he worked with real-life characters and their experiences, respecting their free expression. This supposedly “impure” form of documentary, mixing the immediacy of direct cinema —with a concealed camera— with a fictional story, probably presented more truth than many emerging, supposedly more objective devices. Rogosin became the link between the generation of the thirties —Frontier Films— and a younger batch —Leacock, Pennebaker, Maysles, Wiseman...— who were to extend new documentary forms such as direct, vérité and candid eye in the sixties. We’ll be screening a new digital copy from the Cineteca di Bologna.

By way of an appetizer, the session includes a restored digital copy of the urban documentary In the Street, filmed on the Upper East Side of Manhattan a decade previously by the photographers Levitt, Loeb and Agee, who manage to capture the feeling of energy in the street. 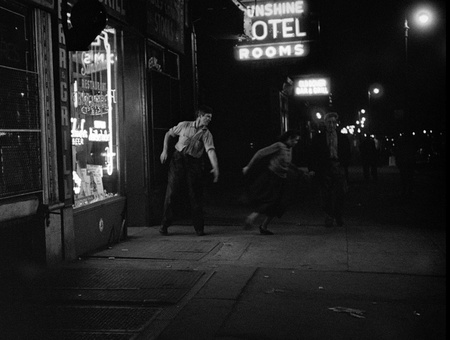