The work of the composer Carles Santos (Vinaròs, 1940-2017) is renowned internationally for its variety, daring and experimentation. The piano was the starting point of his career, which he used to display all kinds of possibilities, even the very destruction of the object itself. As a young man he was classically trained, later taking this education towards composition and fusing it with other forms of language.

In 1963 he came across the avant-garde scene in Barcelona and met, among others, Pere Portabella, with whom he created a director-musician collaboration that was unusual in the history of cinema. The two men worked together systematically, giving Santos the freedom to compose, perform and stage his musical ideas. Their roles were reversed only once, to produce Preludi de Chopin, Opus 28, No. 7 (1969). On this occasion, Santos grabbed the camera and put Portabella's voice under his baton, dictating the score in such a way the viewer can almost hear the music. Both artists are linked to politics and clandestine activity and use artistic transgression as a means of expression. In the face of the oppression and censorship of the time, experimental practice, far removed from any chain of commercialisation, became the only opportunity for free creativity. A freedom that expresses itself through distance and by destroying the classical language and narrative of film, inspired by what Joan Miró also said was needed in order to save painting: it must be murdered.

The theatrical and musical work Concert Irregular (1967), presented at the Maeght Foundation (Saint Paul-de-Vence) on the occasion of Joan Miró's 75th birthday, marked a turning point in Santos's career. After taking charge of both directing and performing the music, Santos abandoned the traditional format of a concert, considering the piano to be a "useless piece of furniture". This perspective opened up new possibilities as, thanks to its "uselessness", the piano could now be used for anything else.

At the end of the 1960s Santos stayed for some time in New York, where he personally met figures of the avant-garde and Fluxus movement. In the world of music, he was particularly moved by John Cage, Steve Reich, La Monte Young, Terry Riley and Philip Glass. At the same time, the filmmaker Joan Logue was portraying this vibrant interdisciplinary and intergenerational movement in a series of mini-capsules, 30-Second Spots, based on the artists of New York. One is dedicated to Santos and is one of the few documents on the musician's stay in the United States available today.

For Santos, the 1970s were a minimalist adventure in which he played with the visual and musical composition of theme with variations. We see him working with prepared pianos in Pieza para cuatro pianos (1978) and with corporeality in 682-3-133 Buffalo Minnesota (1977), starring Barbara Held, a flautist, composer and sound artist. This film, shot in Castelldefels using out-of-date rolls of film, translates an existing score by Santos into images. The more complicated the composition, the closer we get to the performer and the more details we perceive. It's a combination, another way to represent music which cinema has turned into a widespread practice.

The poet Joan Brossa, known for his desire to "rip" words from paper, played a fundamental role for Santos in the link between music and film. Brossa reminded him of the importance of transgression in art, especially musical transgression; "You already know how to play the piano. Now what?". The poet's presence has allowed us to recover two films for the occasion, starring the Italian magician Leopoldo Fregoli, an exponent of commedia dell'arte, pioneer of the cinematographic gag and famous for his quick-change skills. Together with Antoni Tàpies, Brossa and Santos produced a poetic, pictorial and filmic work that evokes, with a contemporary approach, the world of "Fregolism" and burlesque. LA-RE-MI-LA (1979) is a clear example: here we can see Santos' carnivalesque and interpretative spirit in a perceptive nod to the magic of primitive cinema and the historical figures of all kinds of popular culture.

But the work of Carles Santos must also be examined beyond the perspective of music as it goes that much further and provides a critical, unconventional approach, behind an investigation of the materialisation of sounds and images through literature and phonic poetry. His films broaden filmic intelligence: music is a sound construct and the score a field of action.

The pianist and composer Clara Peya, with her own style, is keeping this radical, liberated vision of music alive today. She takes risks and experiments with forms that connect with a large and varied audience, applying her great mastery and knowledge of classical composition. At the same time, everything that can be heard and is produced during a live concert is an ephemeral experience, concluding a period of research and encouraging a rethink of the mechanisms of permanence and reproduction that surround today's musical world. Her album A-A Analogia de l'A-mort (2019) is an example of this valuable spirit that combines an idea, a musical message, with its exteriorisation and corporeality. This is an innovative communicative experience that, like Santos, very cleverly expands the limits of the piano and the act of listening to music. 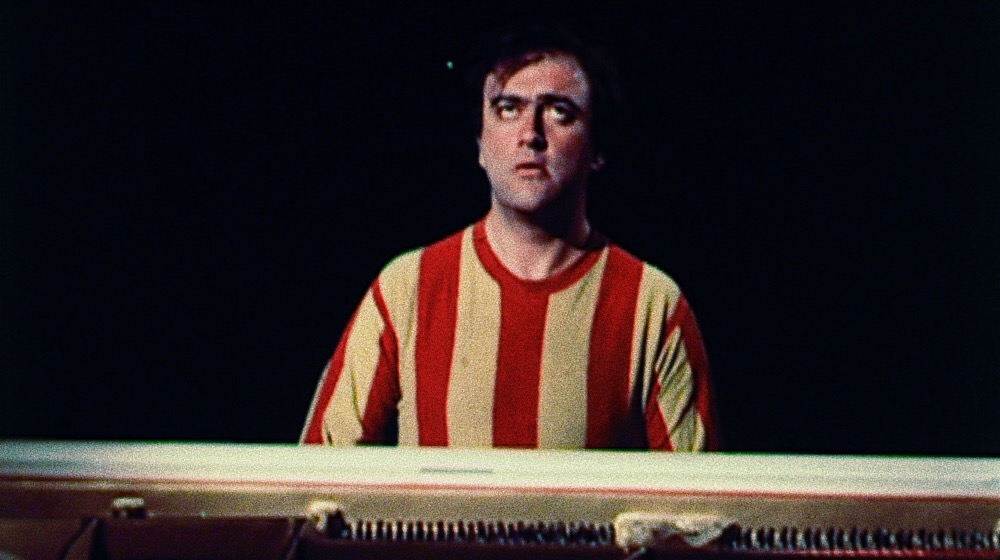