Les Antiquités de Rome was made on several trips to Rome over several years.

It was made somewhere else, in another place. My first film, Jeune femme à sa fenêtre lisant une lettre, was shot in the place in Paris I used as a workshop, but I've never actually filmed in Paris. It's like a condition: the film is only possible somewhere else, in another place. And there's one thing I could say about this, even if it's not entirely absolute: I don't go back to the place where the film was made. I go back to exhaust the elements that will make up the film and, once the object exists, once the film exists, I've exhausted everything the film had to bring out in that other place, which is no longer "other". Perhaps the idea is that I can see, I can have a vision in another place; but not in Paris. As far as Rome's concerned, there's also the effect of the world that has vanished, the antiquities, the ruins. That's what attracted me to Rome. Places that are no longer inhabited, that are no more than a vestige of what was once experienced there, of the passions.

The film is divided into seven parts, each taking its title from an "antiquity" in the city of Rome ("The Rotunda", "The Pyramid", "The Forum of Trajan", "The Ponte Rotto", "The Colosseum", "The Arch of Constantine" and "The Circus Maximus"), plus an eighth unnumbered, out-of-sequence part called "Dream". The choice of the number seven for the structure of the film came independently of any previous source, although it sets up resonances that can be felt more or less strongly with other aspects of the film: the seven hills of Rome, the seven days of the week or rather Easter Week...

First there were the five reels of "The Rotunda", which were shown as a short entitled La Rotonde. The idea of filming other antiquities came very quickly. The second antiquity I filmed was the Forum of Trajan, which was also shown as a short, as had been the case or still was the case with La Rotonde as it had few screenings. Then, from there on, I can't say what idea led me from the seven antiquities. You mentioned it, the seven hills of Rome...

So which antiquities? Those in which there is less to see, those that are limited to a geometric shape, or those that are hidden by scaffolding, the work going on around the ruins, such as the Arch of Constantine or the Circus Maximus, with which the film ends, which no longer has any monumental trace of what this important construction was like in Roman times. What remains are simply the edges of this vast circus, which are like the slopes of a hill. So what attracted me to these antiquities is that there's nothing to show - it's the idea of showing less in order to show more.

What is the Rotunda? It's an oculus, a circular opening; a circle, then. The Pyramid [of Cestius] is an elementary geometrical shape, the triangle. The Forum of Trajan is a square opening. And then the film shifts with the fourth antiquity, "The Ponte Rotto" [Broken Bridge], as if it were a passage towards how the subsequent antiquities are interpreted. And it's there, after the Ponte Rotto, at the end of the first reel of the part entitled "The Colosseum", that the sign saying "Saturday" appears.

At the end of the Ponte Rotto, night arrives on the banks of the Tiber, with the streetlamps coming on. We hear music that matches the images perfectly but it's an accidental encounter, imposed by the exactness of this meeting between sound and image. What is that sound at the end of "The Ponte Rotto", which precedes "The Coliseum"? It's an oratorio by Hector Berlioz entitled L'Enfance du Christ. The magnetic tape was in very bad condition, partly demagnetised, which is why you can hear that song in fits and starts, a perfect match for the image. The last thing you hear at the end of this Berlioz oratorio, L'Enfance du Christ, is "La tendresse infinie à la sagesse unie" [Infinite tenderness with wisdom united]. And there we end the first reel of the "Coliseum", with the people present, quite a few of them, with candles, following the Stations of the Cross. So, if you then see the word "Saturday", then the idea is that the eve of Saturday, Friday night, is Good Friday. And so we come to the penultimate antiquity, the Arch of Constantine. In the first reel you can hear the typical Easter Day bells ringing. So, as some kind of story is always required... it's understood that it's Easter. The film was organised in this way, in the same way as it might come to the mind of someone discovering it.

Les Antiquités de Rome, which begins very formally with elementary geometric shapes, takes on a Christic character. What interested me was being able to find this appropriateness in the very structure of the film, finding its middle. The centre of Les Antiquités de Rome, of the seven antiquities, if you leave out "Dream", is of course the central reel of "Ponte Rotto", which shows the bridge again but almost in twilight, at the end of the day. It's a silent reel. But if you consider the film as a whole, the central part would be the first reel of the Coliseum, in the Stations of the Cross ceremony with the presence of the Pope just before you see the word "Saturday".

We have this shaky, agitated shot of the circular opening at the top of the Rotunda; I mean, the oculus of the Pantheon. I was very annoyed when I was told it was not possible to use a camera or movie camera with tripod inside the Pantheon. I went with the camera, but also the tripod. My intention was to film an image of the oculus that wouldn't move. They wouldn't let me. Luckily! Because if I hadn't had that shaking - because it's very difficult not to shake, especially when holding the camera upwards - there would have been no film. And what's that splash? I guess you can imagine. It's horses running in the water in La Camargue, a region in the south of France, at the mouth of the Rhône, where they breed horses. Before reaching the sea there's a marshy area; the horses run there.

Could the oculus be a window?

It's more than a window. It's the aspiration to something beyond. Ultimately, it's much closer to black. What does the window open onto? Sometimes it opens onto a wall, onto boarded-up windows. But, regarding black and inversion, in the "Coliseum" part there's a reel in which you see, on each side of the image, some curtains flapping in the wind, very luminous curtains, and in the centre, between these curtains, there is black. It's the opposite of what a window normally looks like. What the camera saw were those very bright curtains on the left and right, which caused what was in the middle to become black. I liked it a lot, as it brings together several of the blacks in the film. Of course, the one in the "Forum of Trajan", with the black square where it disappears and comes out again. It's passing through the frame.

The circular opening of the Pantheon appears twice in the film: once at the beginning, in the first antiquity, and once at the end, in the "Dream". Did the first reel, which was already part of the short, La Rotonde, call for or make the other reel necessary, the one seen in the "Dream"?

I'm pretty sure it wasn't filmed at the same time. I don't think it's the same light. In "The Rotunda", at the end of this first part, the weather's good. The sun even shines into the Pantheon. It's lighting up the walls. Whereas at the end of the film you can see the sky is overcast.

The way in which it was composed, there's a reversal effect in this film until "Dream", which in fact shows the reality of what was heard. From the start we hear these words: "It began to rain. It was like the end of the day, the sky darkened. We went into the church and we were in the centre of the city", and so on. However, in this first antiquity, what we see isn't the rain. We don't find what we're going to see in "Dream", which shows the reality of what we hear, which is repeated: "It started to rain". And we see the cars driving in the rain, the people passing by with umbrellas...

The theme of "double" is undoubtedly central to the film. But perhaps, more accurately, it's more like duplication: it's not that we're confronted with shots, structures or people who've been doubled but rather we're continuously seeing the process of duplication, the formation of doubles. Everything that is one becomes two. For example, the repetition of actions is used as the driving force for a lot of reels. In this duplication, what would be the place of the absent young man? It seems to us that he might, somehow, have escaped from this figure of the double. This figure is obviously not a double of the filmmaker, it's something else.

Yes, but there's no need for opposition. I find the idea of duplication very interesting but it doesn't mean we don't need the other, or their absence. I think about this in relation to the penultimate reel of "Dream", with the second chair I placed next to the one seen in "The Coliseum". It's different from duplication. I don't sit down on either of the two chairs; I lie down and look at the two empty chairs, even though there's no-one there, as if they were a couple, the place where there a couple could be. This image can be interpreted in terms of the idea of duplication or exclusion, leaving the space empty for two people who don't meet up, who are missing. 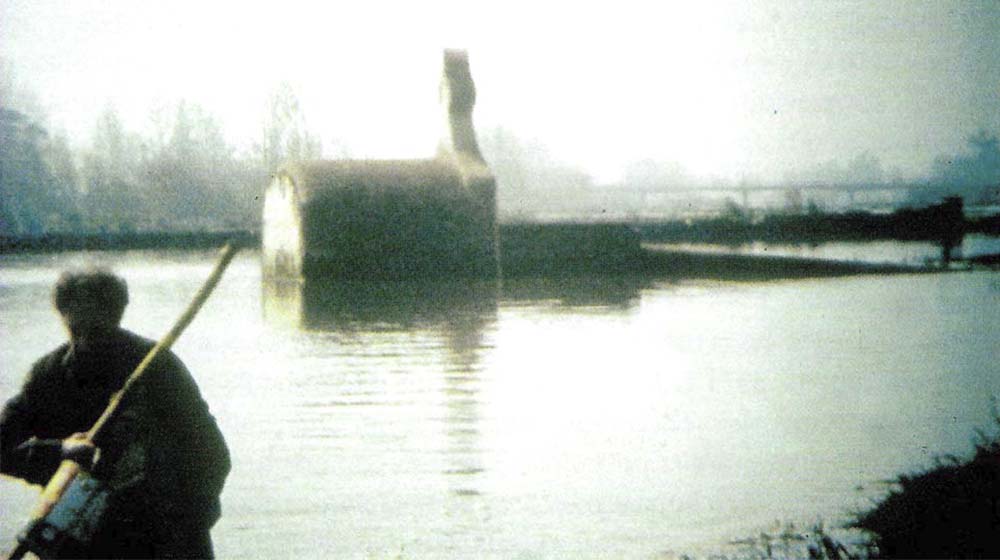 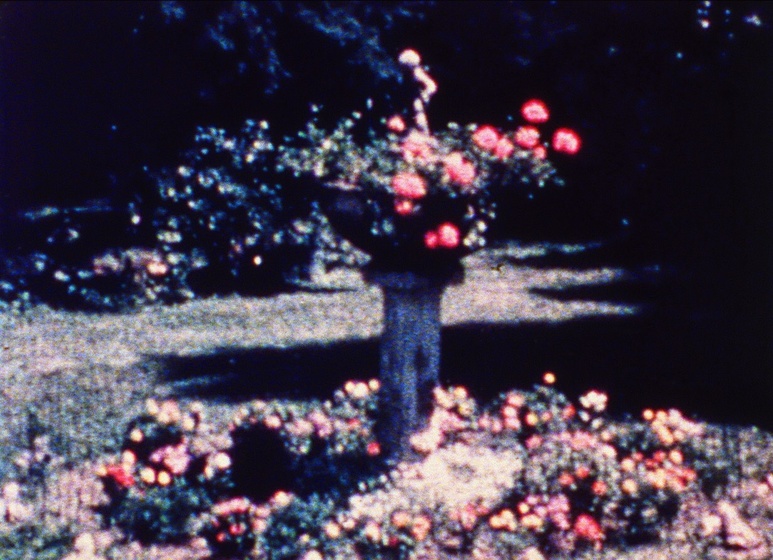 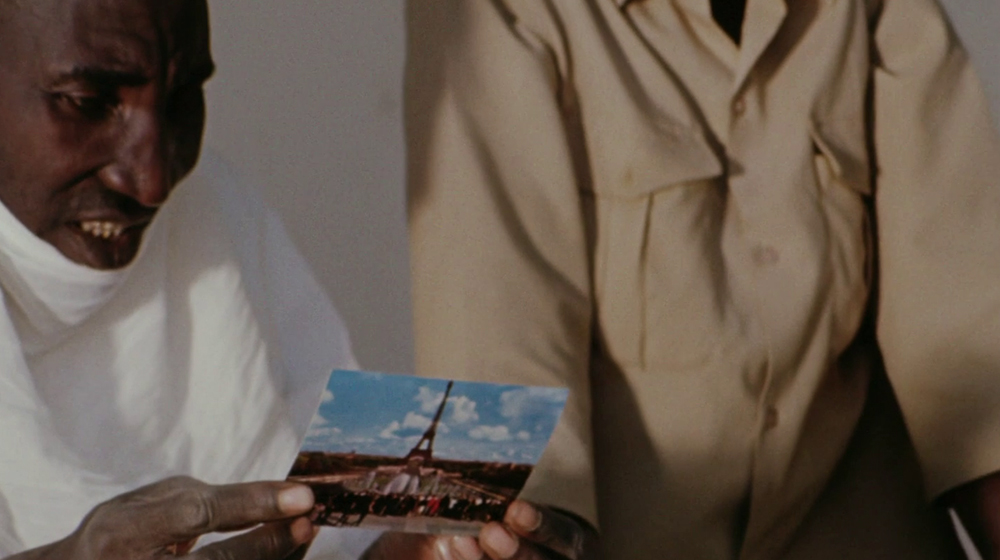