Adam Curtis is correct to argue that discourses of 'self-organisation' and anti-hierarchy are neither original and nor do they necessarily conflict with the logic of neoliberalism.

When I spoke to a fringe meeting after the recent TUC-organised protest against the government cuts, a small group in the audience started mildy dissenting. They were objecting to my claim that what we must do now that neoliberalism has fallen into crisis is impose a new orthodoxy. As far as I could tell, the dissenters didn’t belong to any kind of political organisation –rather, they expressed a weary contempt for political organisation as such. There was little point participating in existing political processes, or in competing for hegemony in the media, they said. Furthermore, trade unions were “bureaucratic” (but, as I suggested to them, wasn’t the “bureaucratic” structure of the TUC what enabled it to get half a million people including them onto the streets of London?). All that you could do, they maintained, was withdraw as far as possible from the structures of the state; maybe it would be possible to influence some of the people with whom you immediately came into contact. They seemed to believe that a widespread spiritual renewal was more likely than even modest change achieved through organised politics.

What was striking about these views – coming from people who would presumably consider themselves far to the left of mainstream politics – was their remarkable congruence with the ‘Big Society’ rhetoric pushed by David Cameron. Just like Cameron, they argued that top-down control, government, hierarchy and bureaucracy are all old, inefficient and oppressive.

I don’t think it’s going too far to say that these anarchist-lite views constitute one of the dominant ideological constellations of our times. Adam Curtis’s recent television series All Watched Over By Machines Of Loving Grace has come in for some criticism - not least on this site, in a post by Luther Blissett – but I maintain that Curtis’s television essay was timely and important because it went some way towards identifying the contours of this ideology. What Curtis identified in the series was a curious and superficially paradoxical mixture of fatalism (DNA means that nothing much will ever change) and can-do dynamism (individuals are a boundless reservoir of creativity). But this is only apparently paradoxical – the view that nothing can change at the level of political system is actually perfectly compatible with the belief in the “creativity” of individuals and small groups.

The task of thinking critically about this ideology is given special urgency by the adoption of a language of anti-hierarchy by new political groups. Indeed, it was Curtis’s mention of UK Uncut in an article he wrote for the Observer which prompted so much of the anger he faced. I unequivocally celebrate the emergence of UK Uncut – but this does not entail an uncritical acceptance of some of the rhetoric that has surrounded the group. 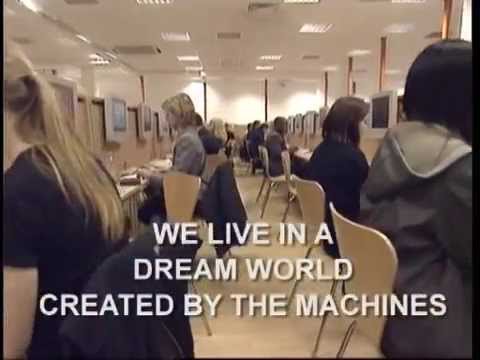 In my view, All Watched Over By Machines Of Loving Grace raised at least three crucial issues about discourses of self-organisation and anti-hierarchy.

1. They can be functional for neoliberalism.

One question Curtis’s series posed was: why has the rhetoric of self-organisation been allowed to propagate so readily under neoliberal hegemony? The uncomfortable fact is that, while the ‘old’ ‘hierarchical’ and ‘bureaucratic’ labour movement forced capital into conceding a welfare stat e and the NHS, groups espousing ‘self-organisation’ have tended to fail in their stated aims. Sadly, this goes for the recent student movement too. It would be a terrible mistake to underplay the importance of this movement: the very fact that militancy was happening on this scale produced a rupture in the UK’s supposedly ‘post-ideological’ atmosphere. But as with UK Uncut, the celebration of the student movement shouldn’t mean that we consume all of the breathless rhetoric it has inspired, or accept inflated claims about what it achieved. Some went so far as to proclaim that the movement’s allegedly new forms had ‘abolished hierarchy’ – yet there seemed to be something of an informal hierarchy within the movement itself. Many of the hubs were Russell Group universities, and some of those pushing the idea that hierarchy was dead were privately educated Oxbridge graduates. One of the pernicious effects of the emphasis on hierarchy (and anti-hierarchy), in fact, is that it obfuscates questions of class.

It should be noted that whilst rhetorics of self-organisation have propagated, neoliberalism itself used every single thing it wants the left to believe is outmoded: top-down control, government, leaders, hierarchy and bureaucracy. Neoliberalism was as top-down as you like: originating in think-tanks, its ideas were then propagated via government and influential party leaders (what would neoliberalism in the US and the UK have been without Reagan and Thatcher?) Furthermore, neoliberal power shows that there is no necessary opposition between the top-down and the decentralized: instead, neoliberal managerialism combines the two. In their post, Luther Blissett cite Felix Guattari, but Guattari’s collaborator Gilles Deleuze understood very well the Kafkaesque form that neoliberal power would assume. With uncanny prescience, Deleuze’s essay “Postscript On Societies Of Control” describes a power that is both top-down (management must be obeyed) and decentralized (via systems such as ‘continuous professional development’, the worker ends up performing their own self-surveillance).

2. There is nothing new about these discourses

Curtis also showed that, despite appearances to the contrary, there is nothing ‘new’ about discourses of anti-hierarchy and self-organisation. Some of us first encountered them via cyberculture in the 1990s: in 1995, the Wired editor Kevin Kelly’s Out of Control: The New Biology of Machines laid out the then latest version of the ideology that Curtis analysed in All Watched Over By Machines Of Loving Grace. But the series demonstrated that these ideas have a lineage which can be traced back from ‘60s communes, to postwar cybernetics and to the early days of the ecology movement. All of this is important, because neoliberalism’s triumph depended upon the imposition of a temporality which defined hierarchy, the state and organisational discipline as old and the network, rhizomatic distribution and individual creativity as new. Yet concepts that have been absorbed by Bill Gates and mobile phone companies can hardly continue to be described as ‘new’. 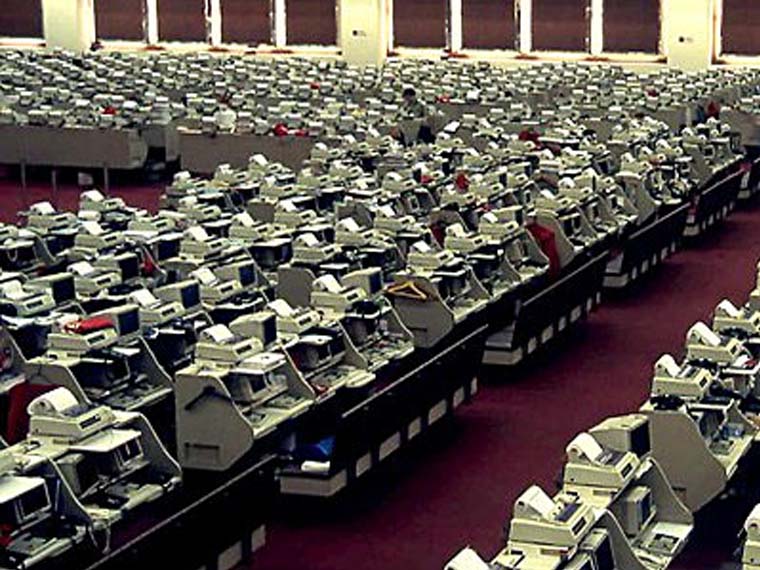 3. Adopting self-organisational methods could be counter-productive

Curtis also questioned the efficacy of these discourses as the basis for oppositional practices. Here Curtis’s critique closely resembled arguments recently presented by Jodi Dean, most notably in her book Democracy and Other Neoliberal Fantasies. Dean argues that even “as they echoed the criticisms of the state prominent on the right, leftists failed to provide a compelling vision of a new form of social solidarity.” (34) “The emphasis on networked communication strategies,” she adds, “displaces political energy from the hard work of organising and struggle.” (40)

It might be that the student movement and UK Uncut have been impeded by their commitment to discourses and practices of self-organisation . UK Uncut’s success in disrupting capital could have far less to do with its much vaunted network openness and much more to do with the fact that is organised around a simple dogmatic message – if tax-avoiders paid more then there would be no need for cuts in services.

In any case, power and hierarchy cannot be abolished by fiat. When formal power disappears, a more oppressive informal power structure can appear in its stead. What we can be then be faced with, as Curtis showed, is a worst of all worlds situation– in which the most manipulative, vocal or passively aggressive dominate, but in which decision-making is slow and cumbersome. One of the reasons that the student movement has been so quiet since Christmas might be that it lacked institutional robustness which could allow its antagonism to be sustained after the initial outpourings of affect had waned.

Besides, is hierarchy an intrinsically bad thing? When these disputes over self-organisation blew up in December, Richard Seymour argued that hierarchy “is, as much as anything else, an ordering of priorities and tasks, a division of labour, which is indispensable for radical political organisation. This is not to say that there hasn’t been elitism on the Left. This isn’t to say that all the old hierarchies are defensible. Sexism, racism and imperialism have been among the flaws of large parts of the European Left in the 20th Century, and I would be the last to claim that these have been completely overcome despite the civilizing effects that past struggles have had. But there is nothing about hierarchy per se that is objectionable. On the other hand, there is such a thing as the tyranny of structurelessness.”

The upshot of all this is not that we return to what the neoliberals called the ‘old’ politics, even supposing that were possible. This would confirm rather than challenge the temporality neoliberalism has imposed. It isn’t a case of having to choose between an ‘old’, discredited Stalinism and a ‘new’ networked post-leftism. Rather, we can learn from what the neoliberals did, and use an ensemble of strategies. The trade union movement is evidently still capable of mobilising hundreds of thousands of people, as the March TUC event and the June 30th strike amply demonstrated. The student movement and UK Uncut, meanwhile, have energies, concepts and strategies which the trade unions lack. A synthesis of these two approaches would yield something genuinely new.

Much of the leftist discourse around self-organisation stems from a time when Stalinism was a clear and present danger; to say the least, it doesn’t pose such a danger any more. The primary challenges we now face no longer concern the critique of ossified structures, but the creation of new organisations, institutions and concepts. Similarly, rather than being confined by a too-rigid set of ideological dogmas, the problem is a set of ideas that are too loose and vague to pose a challenge to the neoliberal orthodoxies which continue to dominate our workplaces, our public services and the media. The task is to produce a vision of social solidarity that is actually new, and Curtis’s series is valuable for showing that this cannot be delivered by familiar discourses about networks and self-organisation.