There has been colour in film since the very beginning, with eighty per cent of films at least partially in colour as early as 1895. This is the first of a series of sessions dedicated to chromatic experiments in early cinema, where we’ll be presenting a series of works that follow the various procedures of colour applied to film. One of these is Nino Oxilia’s ‘experimental’ melodrama, Rapsodia Satánica, which explores a female variation of Faust in a spooky way, with references to Italian futurism and choreography by Loïe Fuller.

The so-called ‘applied colour’ colouring process as a result of a series of procedures: toning, tinting and colouring done by hand or technically, played a very important role in both what was known as 'cinema of attractions' as well as cinema from the following period, which aspired to ‘natural colour’. Initially, the intention of colour was to introduce discontinuity, functioning as an element of attraction and awe. It was later on that colour experimentation became more complex and refined.

Apart from showing Nino Oxilia’s film, the gap between these two periods is covered in our session by the presentation of shorts by the Gaumont company and creators such as Georges Denola; a maze of melancholic narrative scenes full of fantastic elements where, in among the colours of various flower species, we see caterpillars and butterflies turning into women dancing and writhing like snakes in a quest for eternal youth. 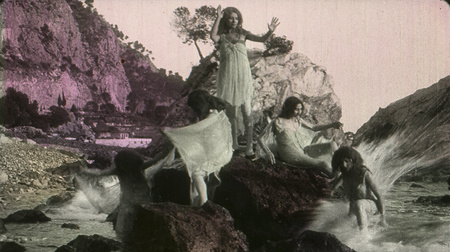 Satanic Rhapsody. The origins of colour in film