Experimental film has always had affinities with the most innovative musical expressions, remote from popular music. Many of the aesthetic explorations of filmmakers who were precursors of visual music (Oskar Fischinger), found footage (Bruce Conner) or queer cinema (Kenneth Anger) have been direct influences on the making of music videos in the world of pop and rock. Detecting the origins of the presence of music in experimental film to explain the artisticness of video clips or the sonority of the visual arts is a task which has come to the fore in recent years, with books being written and exhibitions created. This article avoids this approach to trace a path that invokes three less covered musical dimensions in audiovisual terms: instrumental jazz, pioneering electronics and American minimalism.

Experimental film practices, particularly those that renounce the use of dialogue or voiceovers, are excellent opportunities to include instrumental jazz, electronic or minimalist music. The abstraction of these sonorities is a perfect match for visual explorations, intertwining forms according to synesthetic criteria, where the structuring of musical time is joined by filmic representation of movement, showing, as the English art historian Walter Pater wrote, how “All art constantly aspires towards the condition of music”.

Bridges-Go-Round (1958), by US filmmaker Shirley Clarke, is a four-minute film that offers a variety of coloured takes of New York’s bridges. In terms of sound, this visual choreography could not be more stimulating; it comprises two different but equally enigmatic sound tracks. The first of them comes from two pioneers in the introduction of electronic instruments into fiction cinema (Forbidden Planet, 1956) and the second is by a well-known jazz composer who produced discs for Dave Brubeck, Thelonious Monk and Miles Davis. The film’s opening credits are indicative: “Electronic Score by Louis and Bebe Barron” and “Music by Teo Macero”. Various layers of electronic bleeps and vibrant atmospheres oscillate throughout a robotic composition, reminiscent of the science-fiction films of the time. The synthetic sounds produced by Bebe and Louis Barron contrast with the jazz music of Macero’s acoustic instruments. Here, a cacophony of angelic voices opens and closes with a theme in which melancholic trumpet notes draw subtle lines on a base of diffuse textures made up of double bass and percussion. Clarke used the first until copyright issues threatened its inclusion. She decided to commission a new composition but on more than one occasion she showed them one after the other, like an asymmetrical sound diptych.

There are other experimental films with more or less popular jazz music. Many of them are included in the tradition of abstract animation, seeking synchronies between musical notes and plastic solutions. This is the case of films such as Begone Dull Care (1949) by Norman McLaren , with music by the pianist Oscar Peterson; Films No. 1 (1948) by Harry Smith, with the trumpeter Dizzy Gillespie; and Catalog (1961) by John Whitney, with the saxophonist Ornette Coleman. Mention should also be made of other filmed proposals such as Daybreak Express (1953) by D. A. Pennebaker, with music by Duke Ellington; Magic Sun (1966) by Phill Niblock, with a recording of a performance by Sun Ra & the Arkestra; and Peggy's Blue Skylight (1964) by Joyce Wieland, with a composition of the same name by Charles Mingus.

One of the most significant films for instrumental jazz, for its daring sound treatment, is New York Eye and Ear Control (1964) by Michael Snow. Albert Ayler, Don Cherry, John Tchicai, Roswell Rudd, Gary Peacock and Sunny Murray perform an improvisedfree jazzof aggressive rhythms, sudden alterations and strident timbres. The silent sequences at the start are the prelude to the energetic command of Albert Ayler’s tenor saxophone.

In 1958 the French composer Edgar Varèse created a piece of electronic music for the Philips Pavilion, designed by Le Corbusier for the World Expo in Brussels. The resulting film, Poème électronique (1958), is a sound composition for 425 speakers and 20 amplifiers. Its multifocal approach was based on an analysis of the potential of reverberation. This multisensorial experience, one of the first film practices involving sound produced by electronic means, is similar to the project by sound artist Henry Jacobs and the filmmaker Jordan Belson. Between 1957 and 1959, they developed the Vortex Concerts, live experiments in electronics and light, at the Morrison Planetarium in San Francisco.

In the late sixties, numerous cosmic-style electronic tracks were added to expanded filming inspired by psychedelia. Cybernetik 5.3 (1968) is a film by John Stehura with music by Tod Dockstader. Two Images for a Computer Piece (1969) has similarities with it. It is a film by Lloyd Williams with a soundtrack by Vladimir Ussachevsky. OFFON (1967-72) by Scott Bartlett, with an electronic soundtrack by Manny Meyer, and Mutations (1973) by the filmmaker Lilian F. Schwartz, with computer music by Jean Claude Risset, reveal dissonances that cross features of concrete and electronic music. At times they anticipate ambient music, the rhythms of minimal techno or the sinuous scores of cyberdelia.

The electronic sounds of Rohfilm (1968) by Germans Birgit & Wilhelm Heinand Variations on a Cellophane Wrapper (1970) by Canadian David Rimmer are clearly set in the realms of noise music. In the first, Christian Michaelis combines radio frequencies and excerpts from discs recorded in a deafening collage. In the second, the versatile Don Druick produces rhythmic patterns, rough textures and electroacoustic tones that form a thunderous whole.

Then Anthony Moore, Mike Ratledge and Brian Eno are three English musicians involved in numerous film productions. Moore has been a regular collaborator with the German filmmakers Werner Nekes and Dore O. on titles such as Diwan (1973) and Kaskara (1974), bringing his dense atmospheres of keyboards, synthesisers and sequencers. Mike Ratledge wrote music for Laura Mulvey and Peter Wollen’s mythical film Riddles of the Sphinx (1977). In the case of Brian Eno, we have to differentiate between a few original collaborations, such as Berlin Horse (1970) by Malcolm Le Grice, and innumerable uses of his recordings without any kind of legal agreement.

Minimalist music is identified with a series of US composers who were active as of the sixties. La Monte Young, James Tenney, Steve Reich, Terry Riley and Philip Glass are its main representatives. They were influenced by serialism, indeterminism, randomness, African percussion and Indian music. With the exception of La Monte Young, all wrote music for films.

In 1951 James Tenney collaborated with a friend from his youth, Stan Brakhage, adding a piano solo for his first sound film, Interim. Steve Reich’s link with experimental film stems from his friendship with the filmmaker Robert Nelson. It was for him that he created the sound collages of The Plastic Haircut (1963), Oh Dem Watermelons (1965) and Thick Pucker (1965). In these films Reich introduced tests with magnetic tape, using repetitive patterns to recycle sound files. For the filmmaker Gunvor Nelson he created the soundtrack of My Name is Oona (1969) using time-lapse techniques of vocal recording by Patrick Gleeson. The latter’s music can be heard in the first half of the film Crossroads (1976) by Bruce Conner, the second part of which is a hypnotic interpretation by Terry Riley. Other of Terry Riley’s experiences in experimental film are: Straight and Narrow (1970) by Tony Conrad, together with John Cale; Corridor (1970) by Standish Lawder, a structural film featuring the synthesisers of A Rainbow in Curved Air (1969); and Matrix III (1972) by John Whitney, in which we hear the suspended notes of Poppy Nogood and the Phantom Band.

These musical offerings in cinematographic experimentation show the wealth of music as a model for organising filmic events in time. Embracing musical thought in a cinematographic medium means seeking out harmonies with correspondences that unfold cinematically, aimed at eyes and ears alike. 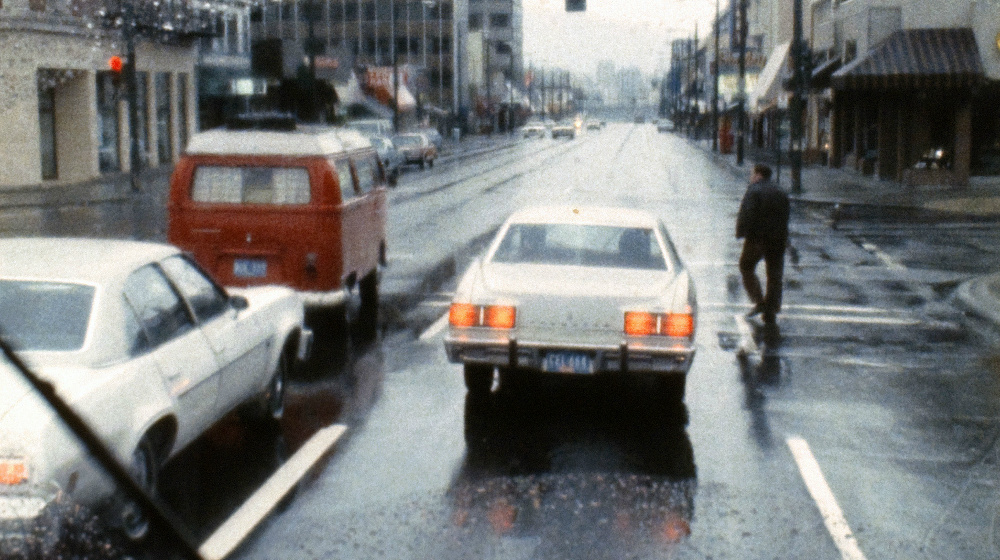