"Born in Trowbridge, Wiltshire, Keen (1923 - 2012) started making films in his late thirties, having already served in World War II (a pivotal experience) and worked for Brighton's Parks and Gardens. His first 8mm pieces, Wail (1960) and Like The Time Is Now (1961) were presented at the local art school film society. In the 1970s, the London Film-makers' Co-op turned away from figurative imagery and emotional engagement, focusing almost exclusively on the formal qualities of film itself. While Keen's work was heavily concerned with issues of construction and projection, it did not shy away from visceral and forceful expressions of self, and of a range of mythic characters and themes. These manifestations reflected his interest in and love of comics and B movies, further filtered through his WWII experiences and his appreciation of surrealist art.

Jeff Keen has made well over fifty films and an enormous number of drawings, paintings, sculptures and poems. He has exhibited nationally and internationally in an eclectic range of public and private spaces; from galleries and cinemas, to shops and beach-fronts, to television and DVD." 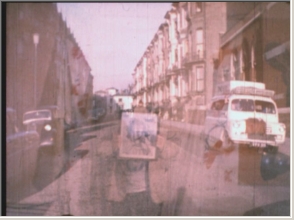